Let’s revive a sunnah of going to Eid-ul-Adha prayer.

2) Don’t eat anything before prayer.

4) Change your route when you return.

Step 1: Shower and Dress Up

As for Eidul Adha, the sunnah is to not eat until returning from the prayer and to eat from the sacrificial meat if it is available, as narrated by Tirmidhi and ibn Majah and Ahmad in the hadith from Buraidah [RA] that, “The Prophet [SAWS] used to not eat on Eidul Adha until he returned (from prayer)” and in the narration from Ahmad, “and he would eat from his sacrificial meat”.

Note: If the sacrificial meat isn’t available, then it is not a problem, insha Allah.

[Narrated by ibn Abi Shaibah with a good chain of narration]

Note: A good handout on the forms of the takbeerat.

Step 4: Change Your Route When You Return

It is narrated from Jabir [RA] that on the day of Eid, the Prophet [SAWS] used to change his route (to/from the prayer).

Explanation: He [SAWS] would go to prayer from one route and return from another route.

What happens when someone gets a headache or they feel sick? Either they take some medicine hoping for immediate relief, or they visit the doctor. But what did the Prophet صل الله عليه و سلم do?

Abdullah ibn Abbas reported that the Messenger صل الله عليه و سلم was cupped on his head for a unilateral headache while he was in Ihraam.

Anas ibn Maalik reported that the Messenger said, “Indeed the best of remedies you have is cupping (hijama)…”

Abu Hurairah reported that the Messenger صل الله عليه و سلم said, “If there was something excellent to be used as a remedy then it is cupping (hijama).”

Hijama (حِجَمَة) comes from the root al-hajm, which means “sucking”. Cupping (hijama) is the process of applying cups to various points on the body by removing the air inside the cups to form a vacuum. This vacuum sucks out the diseased blood which is then poured into the cups by making small cuts to the skin and then disposed.

When performed properly, this is a safe process and there are no health risks in the process (unlike acupuncture, for example).

Allah has made an amazing cure for us for all diseases in hijama. The Prophet صل الله عليه و سلم got hijama on his head, on his foot [Ibn Majah], on his neck [Abi Dawud], on his hip [Abi Dawud], etc.

The angels recommended to the Prophet صل الله عليه و سلم that he recommend hijama to his ummah.

Abdullah ibn Abbas reported that the Prophet صل الله عليه و سلم said, “I did not pass by an angel from the angels on the night journey except that they all said to me: Upon you is cupping (hijama), O Muhammad.”

Hijama is not just a reactionary medicine for a disease. It is actually a preventative measure that prevents diseases, in it is a cure for all diseases by the permission of Allah, it strengthens the memory, improves the intellect and prevents blood from getting hot [Ibn Majah]. For a list of ahadith on hijama, please click here.

Given hijama‘s importance, its benefits and that its a proven sunnah of the Prophet صل الله عليه و سلم, we must revive this sunnah in our lives by finding practitioners of hijama and get it performed on us.

Lastly, please spread the khair by:

“Whoever guides anyone to goodness, his reward shall be the same as those who follow his guidance without lessening a bit of their reward.” – Rasool Allah [SAWS] END_OF_DOCUMENT_TOKEN_TO_BE_REPLACED

But is this the way the Prophet [SAWS] made dhikr?

Abdullah ibn Umar [RA] said, “I saw the Prophet [SAWS] counting his praises of his Lord on his right hand.”

“Count on your fingers, for they will asked, and will be made to speak.”

Do you sometimes wonder on how to increase your concentration and humbleness in prayer? I do.

Salah (prayer) should not be a mechanical chore. To eliminate a sense of “chore-ness” from the salah, here’s something that the Prophet sal Allahu alayhi wa sallam taught: switching tashahhuds[1] in prayer and learning new duaas for prayer instead of always repeating the same duaas. Just as we should read different surahs in prayer, we should read different adkhaar (remembrances).

It is reported in Bukhari and Muslim that the Prophet sal Allahu alayhi wa sallam would teach the Sahaba “the tashahhud the way he taught them Surahs of the Qur’an”.

Most likely, all of us know the same Tahiyyah which is the tashahhud narrated to us by ibn Mas’ood radi Allahu anhu, he said:

“The Messenger of Allah sal Allahu alayhi wa sallam taught me the tashahhud, [with] my palm between his palms, the way he taught me Surahs of the Qur’an:

[Narrated in Bukhari and Muslim]

But did you know that other companions were also taught different duaas for tashahhud? For example, take a look at the tashahhud of ibn Abbass radi Allahu anhuma, he said:

“The Messenger of Allah sal Allahu alayhi wa sallam used to teach us the tashahhud the way he taught us the Qur’an; he used to say,

All compliments, blessed words, prayers, pure words are due to Allah. Peace be on you, O Prophet, and also the mercy of Allah and His blessings. Peace be on us and on the righteous slaves of Allah. I bear witness that none has the right to be worshipped except Allah, and [I bear witness] that Muhammad is the Messenger of Allah (in one narration: … is His slave and messenger).”

END_OF_DOCUMENT_TOKEN_TO_BE_REPLACED

Some things we should do (or begin with) the right hand:

What are some other things that we can add to this list?

END_OF_DOCUMENT_TOKEN_TO_BE_REPLACED

The Mother of the Believers Aaishah [RA] said: I noticed that the Messenger of Allaah [SAWS] was not there and he had been with me in my bed. I found him prostrating, with his heels together and his toes turned towards the qiblah, and I heard him saying, “I seek refuge in Your pleasure from Your wrath, and in Your forgiveness from Your punishment, and in You from You; I praise you and I cannot praise You enough.”

Keeping the feet together is a sunnah of the Prophet [SAWS] that is proven from this hadith. So when we go into a sajdah, we should put our feet together while ensuring that the thighs and knees stay apart, like in this picture below: 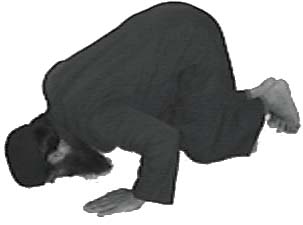 END_OF_DOCUMENT_TOKEN_TO_BE_REPLACED

Al-Bukhaari narrated from Abu Humayd al-Saa’idi (may Allaah be pleased with him), a description of the prayer of the Prophet (peace and blessings of Allaah be upon him), in which he said: “And when he sat in the final rak’ah, he put his left foot forward and held the other foot upright, and sat on his behind.”

Sitting mutawarrikan means sitting in the tashahhud as described above in the hadith found in Bukhari. For the visual learners:

So, sitting mutawarrikan is sitting in tashahhud as described above in the last rak’ah of prayer. This is the same for both genders. Unlike the normal method of sitting, the butt of the musalli (person who is praying) is on the ground and his/her left foot is snugged under his/her right shin.

This should be done in the final tashahhud if there are two tashahhuds in the prayer. But if the prayer has only one tashahhud, such as Fajr prayer or Sunnah prayers that are offered two by two, then one should sit muftarishan (i.e. the normal way).